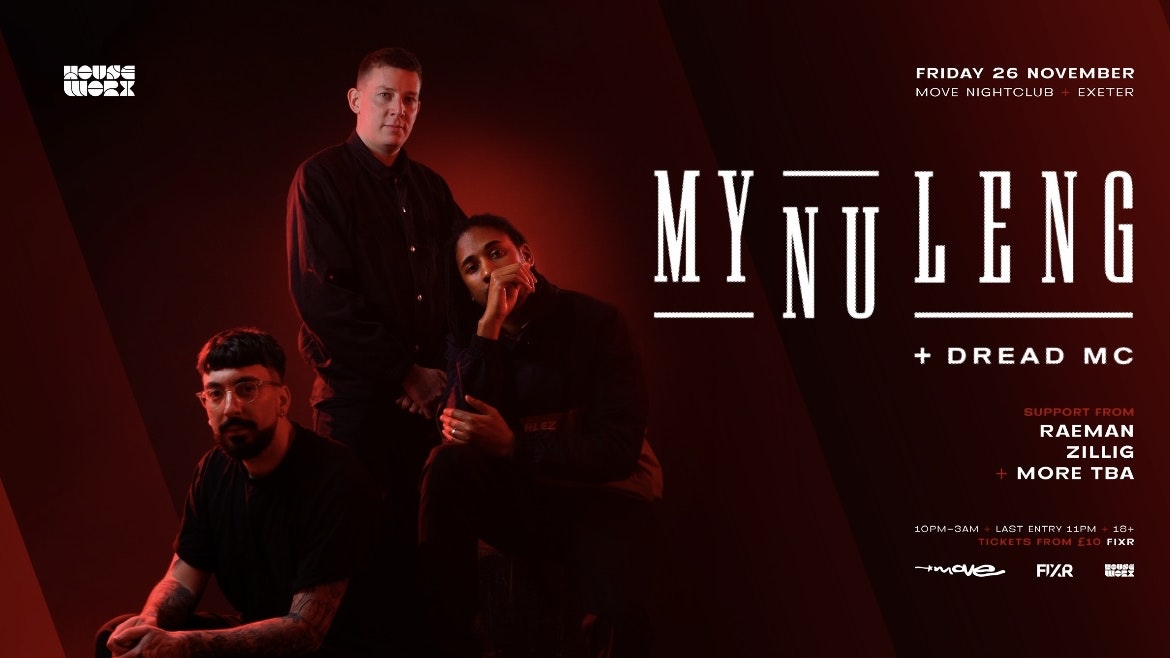 My Nu Leng, Mc Dread and the Houseworx residents

Descendants of a lineage that dates back to the genesis of rave culture, My Nu Leng are renowned for their incendiary DJ sets, which join the dots between a myriad of genres. Their deep musical knowledge, intuitive versatility and technical dexterity have led to bookings all over the world, delivering blistering sets on the big stage at festivals like Glastonbury, Outlook and South West Four, plus a long list of prestigious club spaces. Parallel to their exploits behind the decks, Tommy and Jammo are accomplished producers with an armoury of acclaimed releases under their belts, signing music to era-defining labels like MTA, Black Butter and Shogun Audio, while also drawing from their broad palette to produce remixes for several major labels. Now focused on their own label, Maraki, with the intention of showcasing music from relatively new and unknown artists, they’re using their status to help others on their way up. As anyone who has experienced a My Nu Leng live performance will attest, it’s an experience you won’t forget. Like the DJs they grew up listening to – Oneman, Ben UFO and so on – My Nu Leng don’t discriminate when it comes to the music they play. Though they’ve been on the road for almost a decade, Tommy and Jammo still relish the chance to get on stage and have a party with the ravers in front of them. Their high work ethic never wanes and they’ve performed at some of the world’s best-known clubs including fabric and Printworks (London), Amnesia (Ibiza), Motion (Bristol) and festivals Boomtown, Hideout, Outlook and Glastonbury, traveling to Australia and New Zealand to perform at Lost Paradise, Electric Gardens and Origin plus many more. Production-wise their latest release, the Alter EP, represents a succinct distillation of what they’re all about. From the gnarly opener ‘Spaced’, which samples legendary drum’n’bass MC GQ, to the austere, melancholy vibe on ‘City Lights’ and the ethereal, heartrending closer ‘Signal’, My Nu Leng showcase their many different faces with poise. The EP follows ‘Junction’ in 2018 and their four-tracker ‘Portal’ on Shogun Audio in 2017. Alongside the EPs, Tommy and Jammo have been hired to produce a variety of remixes for acts like Rudimental, Klaxons, Clean Bandit, Wilkinson, Zed Bias, Foreign Beggars, Emalkay and more. Driven by a deep passion for their craft, My Nu Leng are contemporary trailblazers whose enthusiasm for performing, creating and discovering music is unrelenting…