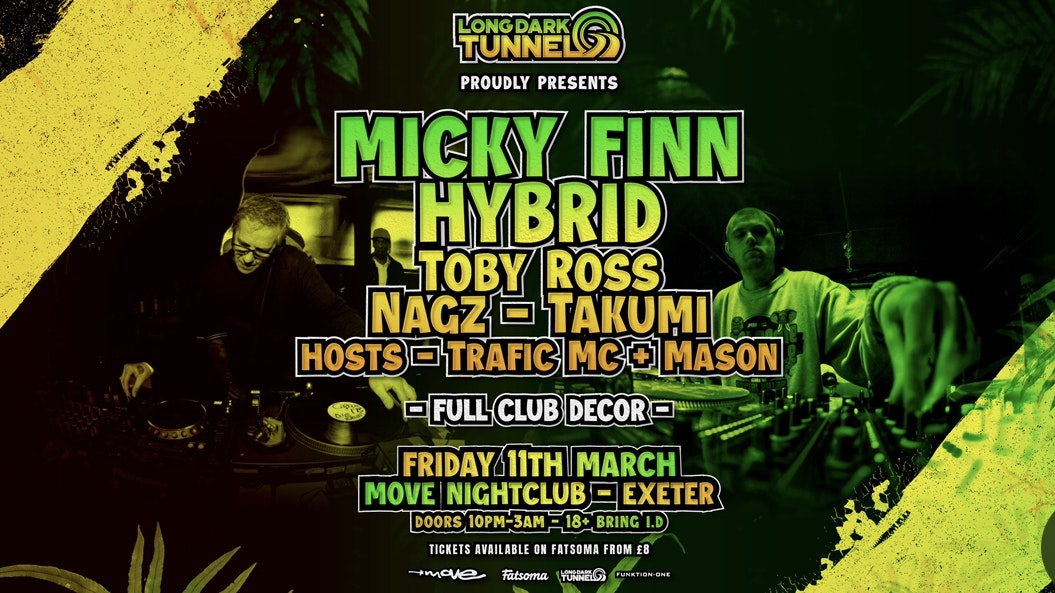 Heavyweight Jungle night. Move will be transformed for this event with jungle decor. We are bringing you a legend, one of the best jungle Djs on the scene right now along with one of the best newcomers.

Pure, incredible talent on the decks for this one.

Hosted by Trafic Mc and our very own Mason.

We don’t use the term legendary very often but with Micky Finn, it’s a must. For 25 years he’s been bringing the vibes worldwide.

Thin geezer, fat tunes: Micky’s a proud entertainer. No chin scratching, no anoraks, no mean n’ moody bullshit; just proper, wholesome fun. Revisit any of his mixes or releases from the last 25 years – especially the hugely influential bassline-heavy Urban Shakedown material with Aphrodite – and you’ll hear his sense of musical mischief instantly. That intoxicating party spirit that brought us to drum & bass in the first place; Micky’s never lost focus of the free-for-all creativity, the audacious low-end cheekiness, the unashamed vibes.

Rising to prominence in 2013 with his chart-topping track ‘Badboy’, championed by many as a modern Jungle classic, DJ Hybrid has remained an ever-present figure. In 2015 he won ‘Best Breakthrough Producer’ and ‘Best Breakthrough DJ’ at the We Love Jungle Awards in London. In November the same year, his debut album ‘Mixed Origins’ received support from across the entire dance music scene. In 2017 his acclaimed imprint ‘Deep in the Jungle Records’ won the award for ‘Best Jungle Label’ at the We Love Jungle Awards, a huge milestone in the artist’s career.

Since then Deep in the Jungle Records has been recognised as one of the most prolific and forward-thinking labels around. DJ Hybrid is seen as one of the leaders of the modern Jungle movement, his unique style allowing him to gain a loyal following worldwide.

Recently, DJ Hybrid has been keeping busy with even more projects – ‘The Prelude’, one of his 2021 releases, was number one in the DnB download charts for over a week, and his USB project ‘The Lost Tapes’ has been a huge hit on the underground. He’s also just finished his latest album titled ‘Diary Of A Junglist’ which is scheduled to come out November 2021 on Liondub International.

Bristol based DJ/Producer Toby Ross has been making movements in the scene over the past year. Toby’s music has received recognition from some of the hottest names in drum & bass, including having notable releases on labels such as Dnb Allstars, Liondub International, Jungle Cakes, Deep In The Jungle Records and more. His sound is a unique style of jungle infused rollers which is always known to rock up the dance.

Toby’s sets always involve a perfect blend of heavy hitters, unreleased bangers and his own productions, creating a perfect vibe for any event. With his ever growing determination to master his craft, a vast collection of dubplates and big releases planned and in the works, the future is looking bright for Toby Ross

Trafic MC is spitting and emitting some new vibes into the Bristol and UK underground music scene right now. Musically involved from a young age, and sharing a love of rap with his mum, Trafic has held those lyricists capable of telling their story, and emblazoning it

upon your ears and your mind’s eye, in the highest regard. Maturing as an artist, alongside his brothers in beats of the Liquifyah fam, he is setting a new standard. Consistently engaging and creating, it’s easy to see why this ball of effervescent energy has gone from rhyming for free 3 years ago at a mate’s night, to becoming a sought after Host and MC at nights and festivals across the UK.

His intricate intonations and original prose allow Trafic to create a vibe, that not only makes you smile, think and consider yourself; but also has a cheeky little wink at life, not taking it too seriously

Exeter Uni student Dj and producer, Nagz is an amazing dj with some mad dubplates